Christine Blank, a veteran freelance writer and editor, covers all aspects of the seafood industry, from fishing to processing to selling and serving the final product. When she is not writing for SeafoodSource, Christine gets to taste scrumptious seafood dishes at U.S. restaurants for her food and travel blog, Flavorful Excursions (www.flavorfulexcursions.net). Christine loves to eat seafood of any kind, but lobster, crab and crawfish are among her favorites. In addition to SeafoodSource.com and SeaFood Business, Christine’s articles have been published in hundreds of leading magazines and newspapers, such as The New York Times, USA Today and Associated Press.

Opportunity for seafood in c-store market

Foodservice sales in convenience stores continue to rise, and some of those dollars are going to seafood meals.

Convenience store foodservice is an USD 11 billion industry and the second largest retail host foodservice category behind supermarkets, according to a recent report from foodservice consulting firm Technomic.

“Convenience stores have shifted their focus to provide a wider variety of fresh, high-quality food offerings to help gain a

Seafood getting more popular in the U.K.

Seafood is being featured much more significantly in U.K. restaurants, and experts expect that trend to continue in 2013.

Over the last year, sushi, sashimi and nigiri entrees rose 13.9 percent, while shellfish dish entrees increased 7.5 percent, according to foodservice consulting firm Technomic’s MenuMonitor database. Sushi chains like YO! Sushi and Asian noodle chains such as Wegamama continue to grow in popularity and expand throughout the

Louisiana shrimp processors are having difficulty keeping up with the incredible landings of brown shrimp in certain estuaries over the past two weeks.

Thanks to a recent cold front that sent the shrimp inland — and the after-effects of Hurricane Isaac — shrimpers are experiencing record catches. “Hurricane Isaac pushed shrimp into the marshes and estuaries, where they fed and grew. A surprisingly stiff October cold front pushed them out

Producers of sustainable Northwest U.S. albacore tuna are promoting their product more in the U.S. after a drop in demand from Europe.

“We ship quite a bit of fish to Europe — particularly Spain — and the economy there is so uncertain,” said Wayne Heikkila, executive director of Redding, Calif.-based Western Fishboat Owners Association.

Around one-third of WFOA’s MSC-certified albacore catch is still shipped to Europe, one-third is 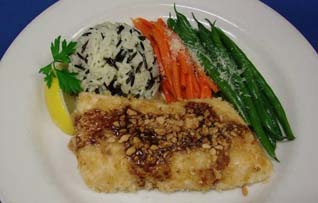 While turkey is still the Thanksgiving staple for many Americans, not all consumers seek turkey on and restaurants still keep seafood as a holiday option. As a result, and fish markets are featuring seafood specials for the holidays.

For example, Scott’s Seafood Bar and Grill in Folsom and Sacramento, Calif., is featuring its regular seafood and meat menu on Thanksgiving Day, along with an Oven Roasted

The Bradford, West Yorkshire-based grocery chain recently added 30 new products to its seafood range and is improving 20 other prepared products. “Customers will now have 425 lines of seafood to get hooked on, along with an array of 50 different fish varieties across the year,” according to a statement from the

A Spanish seafood association says the European Union should temporarily halt all imports of canned tuna from Thailand after the EU rejected lots for inadequate thermal treatment.

ANFACO-CECOPESCA, a private organization of 210 Spanish seafood processors, called on the EU to get stricter with both Thai tuna processors and the country’s health authorities, after they found out that the EU rejected Thai canned tuna imports 17 times in the last 8

Asian American is the fastest growing ethnic population in the U.S. — and they hold major buying power — according to a new report from Nielsen.

At an event in Beijing, China on Friday, Walmart executives announced several initiatives to strengthen the sustainability of its supply chain.

By the end of 2017, Walmart will buy 70 percent of the goods it sells in U.S. stores and in U.S. Sam’s Club stores only from suppliers who use its sustainability index, Mike Duke, president and CEO of Walmart Stores Inc. said at a press conference with government officials, NGOs, suppliers, and

Harmonizing the many global sustainability standards will be a focus of seafood traders attending the Global Aquaculture Alliance’s GOAL conference in Bangkok, Thailand on 30 October to 2 November.

Jeff Sedacca, president of shrimp and aquaculture at National Fish and Seafood in Gloucester, Mass., who sits on GOAL’s Market Panel, believes that is a major challenge facing international buyers and sellers of seafood.