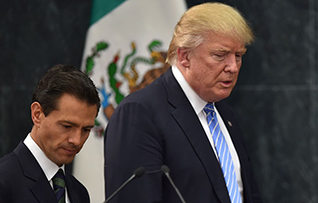 With his “America First" strategy, President Trump has taken a much different view toward the role the U.S. should play in global affairs.

Trump’s prioritization of “America First” reverses a longstanding policy – embraced by previous presidents, Republican and Democrat, stretching back at least two generations – of active international engagement. In a 2015 position paper written for the American Enterprise Institute, a conservative think tank, former U.S. Senators Jon Kyl and Joseph Lieberman expressed their concern that an abdication of the United States’ role as a global leader would threaten the current world order.

“What would the world look like without American global leadership?” they wrote. “It is difficult to say, partly because we take so many of its benefits for granted and its dividends are dispersed. But global politics abhors a vacuum, and American retrenchment is sure to create one. There is simply no guarantee that whoever might fill our space would have the capacity, the inclination, or will to keep the world safe, markets open, and people free.”

In his campaign and thus far in his presidency, a pillar of Trump’s “America First” stance has been trade protectionism. What that means exactly for the world of seafood remains to be seen, but it’s likely to aid fisheries that are primarily domestic and harm those with an international component. So, companies catching pollock in Alaskan waters and sending it across the lower 48 states for fish filet sandwiches will probably be fine under Trump, while firms involved in importing or exporting seafood internationally – and particularly, those doing business in China or Mexico, Trump’s bogeymen d’jour – are more than likely to run into some difficulty.

In the larger picture, Trump’s “America First” policy, is likely to shift the mantle of global leadership to China. As America withdraws from the world stage, China is moving into the vacuum left behind. For years, China has cultivated economic relationships with countries around the globe, and now that the United States is removing itself as an alternative to that influence, many countries have no other option than to embrace China. Eurogroup President Jeroen Dijsselbloem, who heads an organization comprised of finance ministers from countries sharing the euro currency, said it best in an interview with The New York Times at the World Economic Forum in Davos, Switzerland, in mid-January.

“We’ve always said that America is our best friend,” Dijsselbloem said. “If that’s no longer the case, if that’s what we need to understand from Donald Trump, then of course Europe will look for new friends.

“China is a very strong candidate for that,” he added. “The Chinese involvement in Europe in terms of investment is already very high and expanding. If you push away your friends, you mustn’t be surprised if the friends start looking for new friends.”

The biggest question remaining is whether the United States has the ability to stand on its own, especially in the face of the ever-increasingly economic might of China. Or, alternatively, whether the world’s economic system is so enmeshed that China, the United States and the rest of the world’s nations now all rise and fall together, no matter who holds the reins of hegemony.

Industry group pushing for more aquaculture in the United States