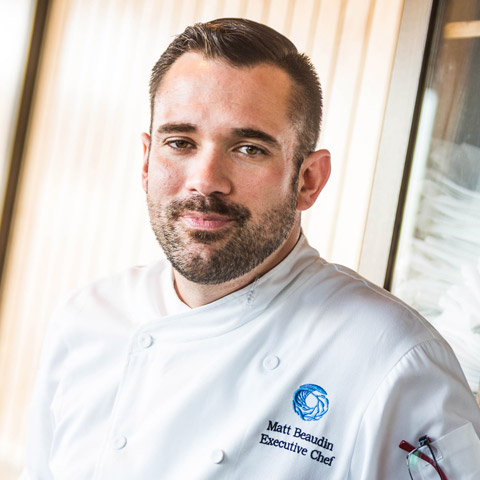 The story of the food on the restaurant plate doesn’t begin in the kitchen, or with the chef who prepared it. The story begins earlier, in the fields from which the food is harvested, or the boat from which it is caught.

The food’s origin is the first chapter in the story of its sustainability — a story that Seafood Champion Matthew Beaudin, the executive chef at the Monterey Bay Aquarium, insists on telling.

Ninety-nine percent of the ingredients Beaudin selects are sourced from within 90 miles of his kitchen, and Beaudin personally meets and shakes hands with many of the fishermen at the docks and farmers in the field. He switched the aquarium’s seafood sourcing from San Francisco to Monterey in a bid to source more locally, and he’s also working on increasing the traceability of the seafood.

Beaudin has connected with local squid fishermen to acquire the squid just hours after it’s harvested, rather than after it’s been shipped to China for processing and back. Such local sourcing enables chefs and diners to know their food’s origin, while serving as an investment in the local community.

In 2016, while promoting Seafood Watch and sustainable food systems, Beaudin traveled to 20 cities, from Baltimore to Vancouver to Chicago. His message?

“We can still fix the system, we can still attain sustainability,” he said.

But getting there will require collaboration and innovation — and better traceability, which will give consumers the information they need to make better choices.

“Sustainability of the world’s oceans encompasses everything from agriculture to consumers and everything in between,” Beaudin said. “People want to do the right thing. The only thing that remains is to get them the information on how to do it.”

Prior to joining the aquarium, Beaudin earned his associate’s degree in culinary arts from the Culinary Institute of America and worked as a chef in the Caribbean, China, the West Indies and across the U.S.

Several years ago, he left a chef job at a 2,000-room hotel and moved to Musanze, Rwanda to cook at the Musanze Opportunity Center. The experience was transformative for him. The team at the center had to plant, grow, build and invent all that they needed while 6,500 feet up the side of a volcano and three hours away from creature comforts.

“I found the root of who I am as a chef. I found a link between food, farming and helping people and I never looked back,” Beaudin said. “You become your own best resource and truly learn to respect everything you have.”

Today, Beaudin’s international partnerships are a bit closer to home, in Tijuana, Mexico.

Beaudin worked with the Binational Committee in Tijuana to launch a program at two orphanages that support terminally ill children with HIV by building sustainable aquaponics gardens to supply them with vegetables and protein.

And he’s spearheading a pilot program to pair orphanages with restaurants. Children between 16 and 18 will work in the restaurants, learning marketable cooking skills and healthy eating habits – a major need in a country with a growing obesity problem.

Profits will be distributed among the orphanages, and local governments will assist with restaurant locations, each of which will be able to support up to four local orphanages. Beaudin aims to prove the model with a first restaurant, then open additional ones across the country.

The project symbolizes all that’s important about food for Beaudin.

“It has the ability to heal, to feed, to cure. The restaurant is the heart of what we are trying to accomplish in Mexico, and it will flow out to so many people in the community, from farmers to fishermen, culinary students and the orphanages,” Beaudin said.