Carlos Rafael, owner of Carlos Seafoods – the largest commercial fishing business in New England – is scheduled to plead guilty to evading fishing quotas and smuggling profits to Portugal on 16 2017, according to the U.S. Attorney’s office for the District of Massachusetts.

Rafael – who was originally slated to appear in court on 20 March regarding charges related to a fishing scheme allegedly stemming from his New Bedford, Massachusetts-based company – will plead guilty to quota evasion and money smuggling in U.S. District Court in Boston at 2 p.m. next Thursday as part of a plea deal he reached with the government. The U.S. attorney’s office issued a tweet on 8 March detailing the new development in the but did not get into the specifics of the settlement.

After his arrest on 26 2016, Rafael was formerly charged with one count of conspiracy, 25 counts of falsifying records and one count of bulk cash smuggling. The attorney’s office referred to 22 examples of Rafael allegedly falsifying claims regarding the fish caught by the more than 40 vessels in his fleet in an indictment it released in May 2016. Rafael submitted records claiming his fleet had caught either haddock or pollock over the four years between June 2012 and January 2016, when the fleet had actually ascertained fish subjected to stricter quotas, such as American plaice, and gray sole, reported South Coast Today. False reports for approximately 815,812 pounds of fish were submitted by Rafael over the course of that four-year period, according to the U.S. Attorney’s office. 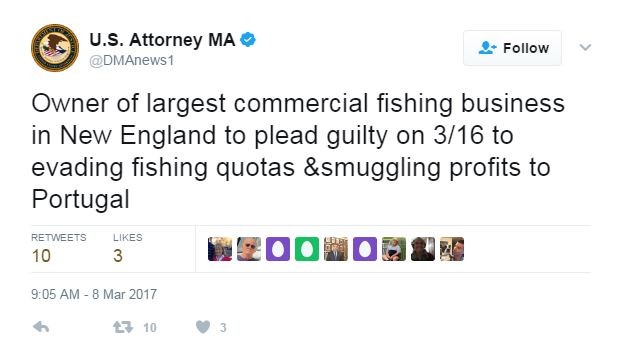 Rafael sold a high volume of his fish to a wholesale business in New York in exchange for bags of cash, investigators claimed.

"During meetings with the undercover agents, Rafael allegedly said that in his most recent dealings with the New York buyer he received USD 668,000 (EUR 631,050) in cash," the U.S. Attorney's Office said, as reported by Mass Live.

Debra Messier, the bookkeeper for Carlos Seafoods, had faced charges alongside Rafael initially, but those charges were dropped in July 2016. Bristol County Sheriff’s Deputy Antonio Freitas was also charged in association with the scheme, specifically for allegedly smuggling and structuring the export of U.S. currency as a means to bring cash through restricted areas of Boston's Logan International Airport; Freitas case is currently being tried in federal court.

Initial proceedings had both Freitas and Rafael being tried together, however, a U.S. District Court judge severed the cases after separate motions were filed by each defendant's respective legal teams in November 2016,  ABC 6 News. Statements made by Freitas to investigators during interviews would infringe on Rafael’s rights when presented in a joint trial, argued William , Rafael’s attorney.

More information regarding the progression of the case can be found below: