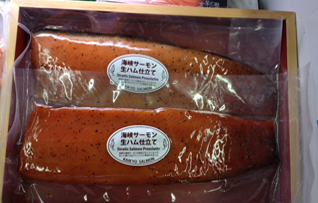 Eco-friendly shark fin – Kobe-based Nihon Novelica, which operates an Indonesian shark processing plant, touted its use of the whole shark, including the head. Killing a shark only to take the fins has been widely criticized in the United States, with states including Washington, Oregon, Hawaii and Illinois, as well as overseas territories Guam and the Northern Marianas Islands passing laws against sales of shark fin. But in East Asia, shark fin soup remains a much-loved delicacy.

Black tipped reef shark (Carcharhinus melanopterus) and dogfish are the main types processed at Nihon Novelica’s factory. While the fins are mainly sent to Japan, the meat is exported to Vietnam, China and the European Union. They do not sell retail products, but rather import and sell a wide variety grades and shred sizes to Japanese distributors.

Another exhibitor, Endo Shoten, of Kesennuma, offered single-serving soup packs made by a contracted packer, as well as foodservice and processing products. Kesennuma is the leading port for shark in Japan. Blue sharks (Prionace glauca) make up about 80 percent of the catch there, with salmon shark (Lamna ditropis) second and shortfin mako (Isurus oxyrinchus) a distant third. In Kesennuma, too, the meat is not discarded, but is used to make hanten, a fluffy white fishcake, while the leather is also utilized.

India turning back to black tiger shrimp as profits fall