Calculating the value of Alaska seafood

Alaska has produced more than 169 billion pounds of fish since statehood was granted to the Last Frontier in 1959, and the Alaskan seafood industry brings in enough product annually to feed every person in the world a serving of Alaskan seafood.

These and other statistics relating to the seafood industry in the state can be found in “The Economic Value of Alaska’s Seafood Industry,” a joint report by The Alaska Seafood Marketing Institute (ASMI) and the McDowell Group, a research and consulting firm, which details the impact of Alaska’s seafood economy. This is the second collaboration over the past two years between the groups.

The report is meant to provide statistics and figures on employment in the industry, labor income, seafood value, exports, and other related subjects. From fun facts (Alaska’s commercial fishing fleet is comprised of about 9,400 boats, which would measure 70 miles if they were lined up from bow to stern in a straight line) to precise tax numbers, the report is a gold mine of research about the Alaskan seafood industry.

The report reveals that in 2016, Alaska’s seafood harvest of 5.6 billion pounds had a total value of USD 1.7 billion (EUR 1.4 billion). Processors in Alaska produced 2.7 billion pounds of Alaska seafood products last year, valued at USD 4.2 billion (EUR 3.6 billion). The overall impact of Alaska’s seafood industry on the U.S. economy is USD 5.4 billion (EUR 4.6 billion) in direct output – that's value that can be directly associated with fishing, processing, distribution, and retail. Such a figure doesn’t include USD 7.3 billion (EUR 6.2 billion) in additional multiplier effects generated as industry income circulates throughout the U.S. economy, the report said. 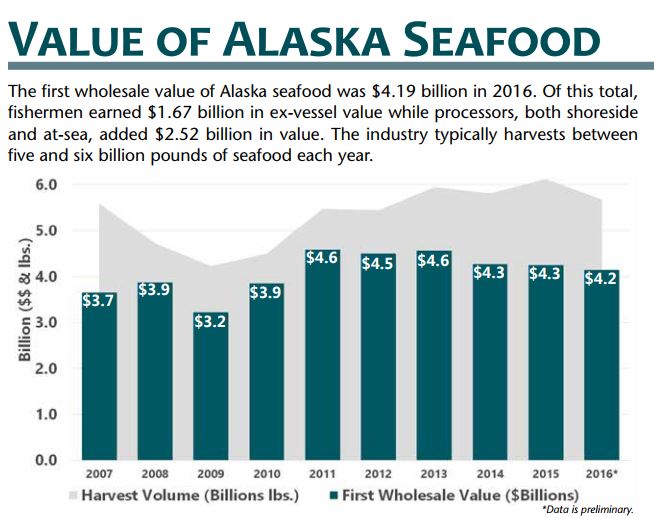 According to the report, the majority of Alaska seafood is exported (66 percent), and Alaska seafood can be purchased in 160 countries around the world. As a result, this brings more than USD 3 billion (EUR 2.6 billion) into the U.S. economy. In fact, Alaska’s fishery is larger than every other U.S. state’s fishery combined.

While salmon is often thought of as the most iconic Alaskan fish, pollock is actually the most plentiful. Around 3.31 billion  pounds of pollock were harvested in the 2015-16 season, compared to 792 million pounds of salmon.

About 56,800 people are directly employed by the Alaska seafood industry, which makes up some 8 percent of total employment in the state. Moreover, the seafood economy is the backbone of many rural Alaskan communities; in 2015, 21,200 rural Alaskans were directly employed by the industry, which accounts for 15 percent of all rural working-age adults. Even so, the number of resident commercial fishermen in Alaska has dropped over the past five years, from 17,817 in 2012 to 15,486 in 2016.

And although the Bering Sea and Aleutian Islands make up the vast majority of the Alaskan fishery harvest volume, the areas only hold a slim majority of the number of seafood workers over other Alaskan regions, with 13,500, compared to 12,400 seafood workers in Bristol Bay, 11,300 in the Southeast, 11,000 in the Southcentral, 6,400 in Kodiak and 3,300 in the Arctic-Yukon-Kuskowim.

The report also details how residents from every U.S. state serve as fishers in Alaska. An estimated 12,146 Americans leave the continental United States every year to work in Alaska, with the majority coming from the West Coast: Washington (the highest number of fishermen), Oregon, and California, but also with a significant number coming from Michigan, Texas, Florida, Minnesota, Idaho, Utah, Nevada, New Mexico, and Montana.

US landings flat in 2019, while seafood trade deficit continued to increase

NOAA Fisheries report: 2018 production down, but value up