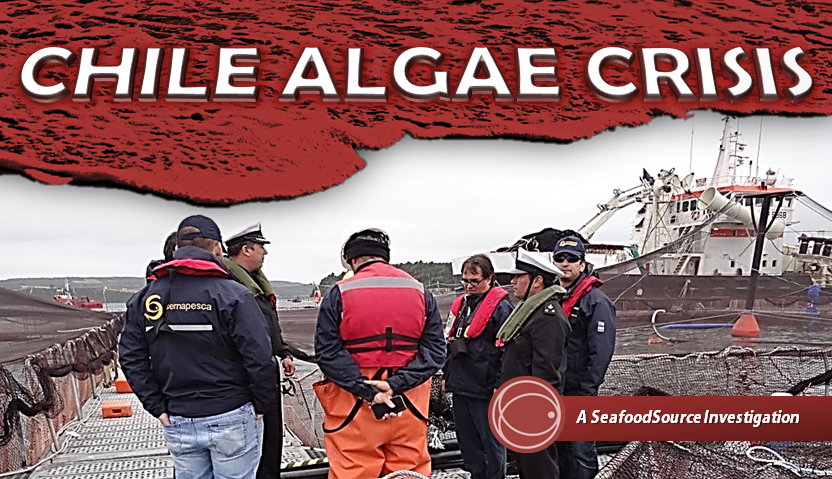 Chile, the world’s second-largest fresh salmon exporter, has suffered losses equivalent to 90,000 tons of farmed Atlantic salmon to the recent algal bloom in the Los Lagos region of Chile, according to a spokesperson for the Chilean salmon industry group. But he and members of the industry are hoping a recent decrease in mortalities may mean the bloom is past its peak.

Felipe Manterola, the general manager of SalmonChile, said 5,000 tons of Coho salmon had also been lost as a result of the bloom. As a result, the Chilean salmon industry has suffered the loss of 15 percent of its production, affecting every salmon farming company operating in Region X, he said.

“The good news is, in the last few days, mortalities have decreased. But the algae bloom is still there and we are still actively monitoring its progress,” he said. “Hopefully it will decrease as the weather conditions will change in the next few days.”

The algae bloom, or red tide, began 22 February but became much larger and more aggressive a week ago, starting 1 March, Manterola said.

“The cause is completely natural and environmental, and there’s very little we can do to stop or change it in any way,” he said.

Companies affected include AquaChile, Australis Mar, , Camanchaca, Cermaq, Australis Mar, Salmones Humboldt, Marine Farm, Marine Harvest Chile, Multiexport Foods and Ventisqueros. The division between those who hold insurance policies for their Region X farms and those who don’t will likely mean a difference in markdowns to the tune of millions of dollars.

According to the Chilean financial news site Diario Financiero, by 3 March, Camanchaca estimated it had lost almost all of its salmon at its Puelche, and farms – 2.6 million fish in total, weighing in at 13,000 tons and valued at more than USD 22 million (EUR 20 million). But the company was fully insured, the report said.

Marine Harvest Chile announced last week it expected total losses of 2.9 million fish at its Punta Redonda, and Norte farms. Multiexport foods said it had lost 1.85 million fish at its and farms and additional losses at three other farms in Region XI, according to the Chilean newspaper La Tercera.

lost at least 110,000 fish at its farm in Region X, Chilean news site T13. The site also reported AquaChile lost 9 percent of its total Chilean production, the equivalent of 3,900 tons (about 2.3 million salmon) worth an estimated USD 15 million (EUR 13.6 million) at its , Herradura, Isla Guar and Huenquillahue farms in Region X. AquaChile was uninsured, the site reported.

Australis suffered unspecified losses at its Calbuco farm, where it has 1.1 million Atlantic salmon worth an estimated USD 6.5 million (EUR 5.9 million), also according to T13.

Continued on the next page >>

Chilean salmon industry on alert with new round of algae blooms