Seafood consumption dipped slightly in 2016, as the average American ate 14.9 pounds. The decrease of .6 pounds from 2015’s figures was noted in the National Oceanic and Atmospheric Administration’s (NOAA) annual Fisheries of the United States report, which was released Wednesday, 1 November.

The report, which provides a snapshot of how commercial and recreational fishing impact the U.S. economy, also noted that commercial fishermen brought in 9.6 billion pounds of product last year. While the volume decreased by 1.5 percent from 2015, the overall value of USD 5.3 billion (EUR 4.6 billion) increased by 2.1 percent over the same span.

Ned Cyr, the director of NOAA Fisheries Office of Science and Technology, said those numbers fall in line with reports from recent years. The numbers for individual species will often fluctuate, but he added that some of the species that were down for 2015, such as Atlantic squid, were among the biggest risers in 2016.

“The consistency of landings is perhaps the most remarkable thing,” he said.

Seafood imports increased last year, both by volume and by value. The 5.8 million pounds imported represented a 1 percent increase, while the USD 19.5 billion (EUR 16.7 billion) rose by 3.5 percent.

Officials said they see opportunities in aquaculture in the coming years. Shrimp and salmon rank among the top three imported species, and officials said most of the imported products come from farms.

Aquaculture harvests, whose reports are a year behind other data, accounted for of the fish and shellfish the U.S. produced in 2015. Oysters, clams and salmon rank as the top farmed products, according to officials. That put the U.S. 16th worldwide, far behind China, India and Indonesia as leaders in aquaculture production.

“(T)he numbers in this report underscore the untapped potential of aquaculture here at home,” said Secretary of Commerce Wilbur Ross. “Expanding our nation’s aquaculture capacity presents an opportunity to reduce America’s reliance on imports while creating thousands of new jobs.”

On Tuesday, NOAA awarded 32 grants valued at USD 9.3 million (EUR 8 million) to help the country grow its aquaculture industry. All of the participating projects are public-private partnerships.

Industry leaders took the report as a sign of good news for the seafood trade.

“This latest report illustrates NOAA’s ongoing leadership in the field of seafood sustainability,” said Gavin Gibbons, vice president of communications for the National Fisheries Institute. “NOAA fisheries have a long history of exemplary fisheries management and this report helps spell that out in solid, science based statistics.”

Once again, both Alaska’s Dutch Harbor and the Port of New Bedford in Massachusetts were America’s top seafood hubs. Dutch Harbor’s 770 million pounds of product, mostly Walleye pollock, made it the top U.S. port by volume for the 20th straight year. New Bedford’s haul of 107 million pound, mostly coming from sea scallops, represented a value of USD 327 million (EUR 280.8 million). That made it the top earning port for the 17th consecutive year. 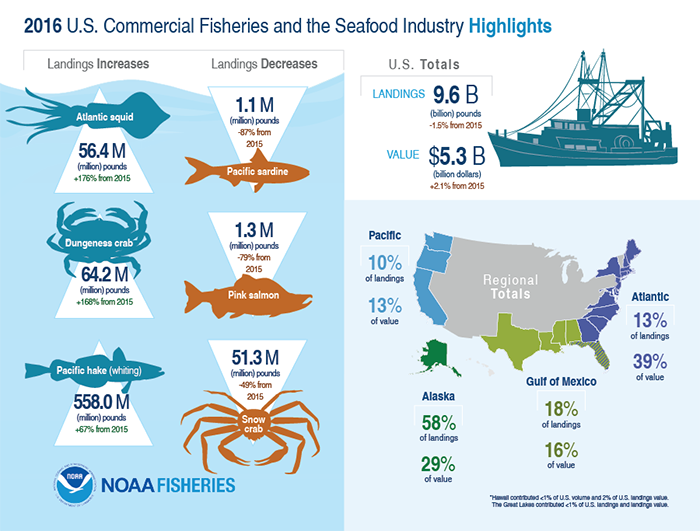 US landings flat in 2019, while seafood trade deficit continued to increase

NOAA Fisheries report: 2018 production down, but value up