Earlier this year, officials with the National Oceanic and Atmospheric Administration used the Lisa Marie, a private fishing boat, to collect data for its annual coastal pelagic species survey. The more was part of an effort to increase collaboration between the public and private sectors.

Earlier this summer as officials with the U.S. National Oceanic and Atmospheric Administration completed work on an annual survey of coastal pelagic species (CPS) in the Pacific Ocean, they received some assistance from a new source: the private sector.

Not only were representatives from the West Coast seafood trade industry on board a federal vessel for five days while survey samples were taken, but one fisherman allowed NOAA officials to outfit his boat with equipment to survey more shallow waters near the coastline. The collaborative venture marked a milestone in a public-private dialogue that’s been going on for years.

The CPS survey collects data primarily on Pacific sardines, Koch said, but it also includes observations on other CPS fish such as northern anchovy and jack and Pacific mackerels. Typically, officials use the Reuben Lasker, a NOAA vessel, to conduct the survey. However, private sector representatives felt the government was missing out on some key data in their work.

Government leaders welcomed the idea to get more data to fill in the gaps they also sought to fill.

“Data is like gold to us,” said Kristen Koch, the acting science and research director of NOAA’s Southwest Fisheries Service Center in La Jolla, California. “If we can collect more of the kind of data we need, it improves the precision of our assessments of these species.”

Because of its size, the Reuben Lasker can only conduct surveys in deeper waters, around 35 fathoms. Fishermen and processers, who must abide by the survey data that is used to establish catch limits for fisheries, contended that large schools of these fish can be found much closer to the shore, in water roughly seven fathoms deep.

Greg Shaughnessy, chief operating officer for Ocean Gold Seafoods, spent nearly a week on the Reuben Lasker. For the 40-year industry veteran, it was an educational experience for him to see to see the steps NOAA officials take to conduct their surveys. He also said he appreciated being involved in the process.

“We feel that we have something to add to the conversation because we’re out there,” said Shaughnessy, who is also a member of the West Coast Pelagic Conservation Group, a nonprofit industry advocacy group. “We’re looking at the ocean everyday.” 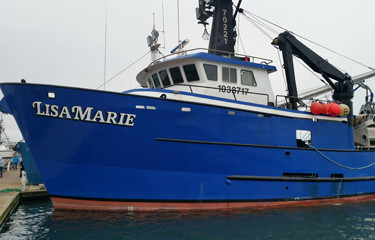 Besides Shaughnessy, Andy Blair, who owns the Lisa Marie, observed the survey on the NOAA vessel. Blair’s boat was also rigged to conduct surveys along the coasts of Washington and Oregon.

The idea for the joint venture stemmed from conversations between current NOAA Chief Scientist Cisco Warner, who was serving as the director of the Southwest Fisheries Science Center at the time; Koch, then the SFSC deputy director; Gerard DiNardo, the Fisheries Resources Division director; Mike Okoniewski, the Alaska operations manager and a fisheries policy advisor with Pacific Seafood; and Diane Pleschner-Steele, with the California Wetfish Producers Association.

Okoniewski said the collaboration and the talks that led up to it indicate an improving relationship between the two sides.

“This has been a real sea level change for the science centers, and they’ve really done a good job reaching out to industry,” he said.

While the survey results won’t be ready for quite some time, both industry and government leaders already hail the project as a success and hope they can do similar endeavors in the near future.

“This is a really positive – experimental, yet, but positive – collaboration that I think we’ve had with this particular group, and we’re looking forward to continuing to work toward jointly getting at more of these observations that help the assessment,” Koch said. “That’s really the bottom line.”