The U.S. Attorney’s office for the District of Massachusetts has rescheduled the plea hearing for fishing magnate Carlos Rafael, owner of Carlos Seafood and figure in a massive fishing scheme involving quota evasion and money smuggling.

Rafael’s plea hearing will now take place on 30 2017 at 2:30 p.m. in U.S. District Court in Boston instead of 16 March, as the U.S. Attorney originally announced last week. A tweet issued by @DMAnews1, the official Twitter handle for the Massachusetts U.S. Attorney’s office, confirmed the time change, as did court documents. 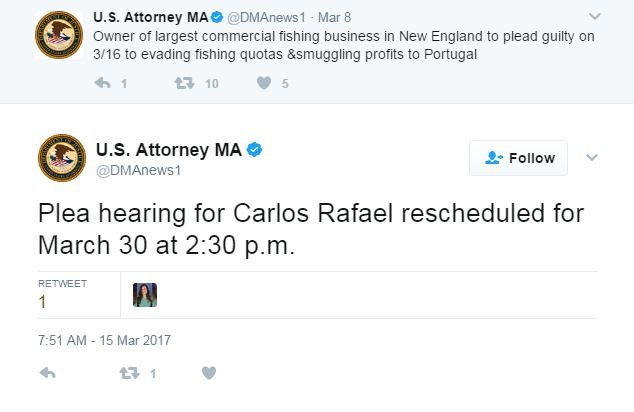 It is anticipated that Rafael will plead guilty on 30 March as part of a deal he and his legal team reached with the government. Information has not been released indicating how or if the schedule change will Rafael’s plea.

Rafael was arrest on 26 2016, in connection a criminal fishing scheme involving the evasion of fishing quotas and the smuggling of profits to Portugal. Following his arrest, Rafael was formerly charged with one count of conspiracy, 25 counts of falsifying records and one count of bulk cash smuggling.