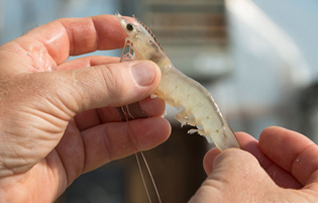 A University of Missouri (MU) professor has invented a shrimp-farming system that not only grows shrimp quickly but also produces zero waste.

“No one in the U.S. has yet been able to demonstrate profitability with shrimp. Ninety percent of our shrimp [consumed in the U.S.] comes from Asia,” David Brune, professor of agricultural systems management at the University of Missouri, told SeafoodSource.

Over the long-term, Asian shrimp farming methods are unsustainable and harm the environment, according to Brune.

“Most shrimp are grown in China, and Thailand, where producers feed wild-caught fish meal and are discharging waste from their ponds into Asian coastal waters. Eventually, these practices will stop and everyone is going to have to go to a limited discharge or zero discharge system,” he said.

Brune, who has researched aquaculture for around 30 years, developed a Partitioned Aquaculture System (PAS) which partitions the fish culture from the water system. Using paddle wheels at the university pond holding one-twentieth an acre of water, a high rate of algae is produced.

It costs Brune around USD 3 per pound to produce the shrimp, so buyers would need to pay between USD 4 and USD 5 (EUR 3.76) a pound for the system to be profitable. “Consumers are going to have to be willing to pay a premium for a product that is produced locally and sustainably. We are guessing only 10 percent of consumers will do that, but that still represents a big market,” Brune said.

Brune plans to harvest the first Asian Pacific shrimp (already at 25/26 . size) by the end of September.

“I will sell the shrimp straight to if I can get enough people to help me and [get the product ready to sell],” Brune said.

Meanwhile, the excess algae produced in the MU pond is harvested using brine shrimp. The brine shrimp mass can be used as a fishmeal replacement to feed the Pacific white shrimp, according to Brune.