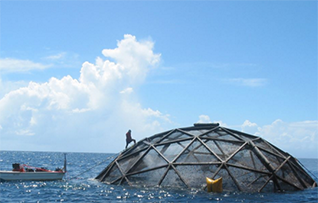 The offshore sector is currently a small fraction of overall global aquaculture, but it will play an increasingly important role in meeting the anticipated demand for seafood as the world population grows past eight billion people by 2030.

That was the conclusion of the sixth Offshore Mariculture Conference, which took place in early April in Barcelona, Spain, gathered the world’s experts in offshore aquaculture to harness their knowledge, identify impediments and brainstorm potential solutions.

This year’s conference explored the challenges and prospects of fish farms away from coastal areas and into high energy or offshore sites. The conference also looked at opportunities to add value through innovations in the supply chain, and at complementary business opportunities that can operate alongside fish farming, such as seaweed production, multi-use platforms and and wave energy.

Ernesto Peñas Lado, the director of policy development and coordination for the European Commission’s Directorate-General for Maritime Affairs and Fisheries, said aquaculture – and specifically offshore aquaculture – was a clear path forward to feeding a growing global population.

“A large amount of this untapped potential lies offshore. Until recently the costs of technology and the economic incentive associated with moving offshore were not aligned, but this is changing rapidly,” he said.

Because of its high costs, there are only a handful of offshore developments operating in the European Union, Peñas Lado said, though the E.U.’s aquaculture sector employs around 85,000 people and is worth between EUR 3.5 and 4 billion (USD 4 billion to 4.6 billion) to the economy each year. Lado noted that aquaculture is one of the five pillars of the EU's Blue Growth strategy, and offshore has the potential to deliver sustainable jobs and growth.

Delegates heard from leaders of current research projects and from farmers who are developing their own innovative offshore mariculture plans.

For example, the E.U.’s EUR 12 million (USD 13.7 million) ‘Diversify’ project is investigating new fish species for the Mediterranean, where aquaculture is already widespread in inshore areas and opportunities lie further from the coast. According to Constantinos Mylonas, Diversify project coordinator at the Hellenic Centre for Marine Research, demand has dropped for sea bass and sea bream, which are the most popular species currently farmed in the Mediterranean.

“Consumers are increasingly moving away from small plate-sized fish and want convenient, clean fish meal preparation instead,” she said.

One solution is to grow these species larger to allow fillet production, but this would increase the cost. Instead, Diversify is looking to farm larger, fast-growing species such as , greater amberjack, Atlantic halibut, wreckfish, mullet and pike perch, Mylonas said.

Michael Rubino, director in the office of aquaculture at NOAA Fisheries Service, explained that the United States is struggling to take advantage of its aquaculture potential. One major cause is the difficult and lengthy permitting process, Rubino said. Despite the challenges, a number of large projects are on the horizon, including two in off the coast of California: the Catalina Sea Ranch mussel farm and the Rose Canyon project that will grow yellowtail jack, white and striped bass in federal waters.

Off Hawaii, the Velella project is still waiting for permits to continue trials. Mariculture pioneer Neil Anthony Sims explained that the latest version of his submersible pod system attached to a single will contain around 15,000 fish, which can be fed and monitored remotely using wireless technology.

Donna Lanzetta, CEO of Manna Fish Farms, aims to open the first finfish farm in U.S. federal waters, but is also still in the process of securing permits. Lanzetta eventually hopes to farm around 2,000 metric tons of striped bass in submersible pods, 14 nautical miles off the east coast of Long Island, New York. She also plans to introduce a multi-trophic system, producing shellfish, and macro-algae alongside the fish.

In Canada, ice is a major impediment to offshore . However, trout farmer Mike Meeker has developed a submersible cage system (pictured right) to keep the trout safe from ice. 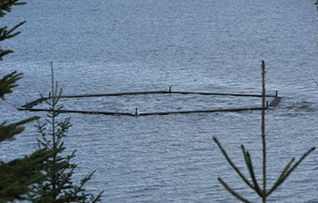 “A farm in Canada is using it ... and successfully keeping the fish at depth,” he said.

Offshore aquaculture in Latin America is a virtually unexplored field, according to Alonso Echevarría Ubilla, of the AEX Group, with cobia producer off the coast of Manta, Ecuador, the only farm operation.

Javier Ponce, the founder of Smart Floating Farms, a Barcelona-based company that is designing solar-powered vertical farms that float on pontoons, shared his aspirations for the development of a multi-layered floating polyculture platform that combines mariculture, hydroponics and solar power, as a complementary alternative to other food production systems.

Paul Holthus, founding president and CEO of the World Ocean Council, praised the opportunity presented by aquaculture. He announced at the conference that his organization is creating an ocean investment platform to encourage ocean users to cooperate in identifying opportunities and challenges.

“(Offshore) aquaculture can have very little impact on the environment if done properly, and this needs to be communicated effectively to people,” Lovatelli said. “They need to be continually reminded of the importance of aquaculture, but no single company can do this; governments need to get involved.”