Problems and progress: Salmon farming and the environment 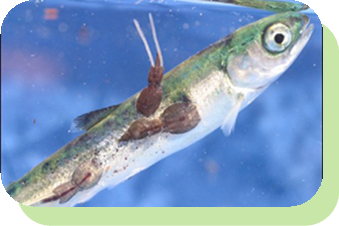 Along with pollution, the potential for sea lice to harm local marine life around a salmon farm has become a point of contention, particularly in British Columbia, where activists recently issued a petition to the Canadian government to limit salmon farm expansion, citing sea lice as a major problem.

The term “lice” is a bit of a misnomer – the creatures are actually crustaceans, but the tiny bug-like parasites commonly attach themselves to fish, which can be fatal to the fish. In an enclosed space where lots of fish live, such as a salmon pen, lice can multiply and build up to the point where they may leave the pen in search of other hosts, such as wild fish.

Marine Harvest and other farmers in British Columbia have come under fire, accused by activists of causing surges in sea lice populations, an allegation Roberts denies. He pointed to multiple studies conducted by a private lab paid for by his own company and the Tlatlasikwala and Gwa’sala-Nakwaxda’xw First Nations. Those studies, produced in 2011, 2013 and 2015 of wild salmon in the area show, if anything, the populations of sea lice change over time. If salmon farms were to blame, he said, the numbers should be more consistent.

Eppling said he has also reviewed the studies done on sea lice in British Columbia, and also does not see a correlation, noting, “The population impacts have not been well demonstrated.”

Those controls take many forms. The simplest way is to remove fish from pens that show evidence of sea lice. Another common method is to use pesticides, but only under strict governmental control. Roberts said his company uses them “sparingly,” and is required to limit them. Canadian regulations mandate an annual maximum of 12 to 15 kilograms in total for all farms in western Canada. The government, he said, monitors usage to make sure farmers play by the rules.

Other farms use hydrogen peroxide. Fish are brought onto wellboats and placed in a highly diluted solution, or bath, that doesn’t affect the fish, but kills off the lice. Eppling said this is effective as well, but “To develop a non-chemical means is the preference.”

Norwegian farmers are working on that, too. The concept of “cleaner fish,” such as cunners or wrasse, is starting to catch on. The smaller fish actually feed on sea lice, and with a little maintenance, early trials show the fish can be used to naturally control the problem. Most farms are not yet employing this method, however.