The five winners of 2017 Seafood Champion Awards were announced in Seattle, Washington U.S.A. during the SeaWeb Seafood Summit on 5 June. Get to know each of the impressive honorees by clicking through SeafoodSource's exclusive profiles below. 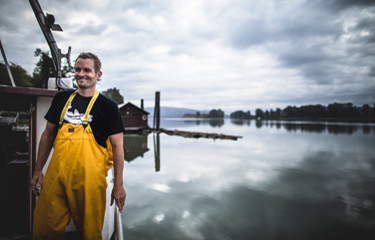 The organization is “creating a movement that is impacting the way people think about the seafood they eat,” according to Bell’s nomination as a Seafood Champion finalist in March 2017.

On Monday, 5 June, Bell was named one of the winners of the Seafood Champion Awards for Advocacy (the award will be shared with the International Pole & Line Foundation).

“I am so honored to be considered a seafood champion,” Bell told SeafoodSource. “I’m a proud of being a chef, and my community is the one I want to engage.”

Prior to working at the Vancouver Aquarium, Bell was the head chef at Lumiere and at YEW Kitchen in the Four Seasons, both highly regarded restaurants in Vancouver. In both restaurants, Bell championed local and sustainable seafood.

“Ned’s vibrant personality, infectious enthusiasm and commitment to improving the health of Canada’s lakes, oceans, and rivers have made a significant impact on those around him,” Four Seasons Vancouver General Manager Martin Sinclair said.

After leaving the Four Seasons in 2014, Bell embarked on a cross-Canada bike ride to raise money and awareness for a sustainable seafood movement in Canada and, specifically, to help build momentum for National Sustainable Seafood Day. It was another example of Bell’s innovative approach to building awareness of seafood sustainability efforts.

Since the end of his ride, Bell said he has been “strategizing with myself and my team about where the opportunities are, and where are our passions are needed most.”

Recognizing that his strengths lie in cooking, education and advocacy, Bell decided to write a series of cookbooks.

His first book, “Lure”, which will be released in September, focuses on educating readers about 40 different sustainable seafood species in the Pacific Ocean (including farmed species), along with recipes.

“Seafood is a clean, healthy protein, and something we should be eating more of, but there is an apprehension or a fear that they [consumers] are going to mess it up,” Bell said. “I want people to cook more seafood at home…and I am hoping chefs learn a ton about sustainability.”

In the book, Bell challenges consumers to eat sustainable seafood once a week for a year.

“That might not be a big ask for some, but it is for others,” Bell said. He also challenges readers to eat “something from the ocean that you haven't had before” once a month.

Bell plans to follow “Lure” with a book on sustainable seafood species from the Atlantic Ocean, and then possibly books focusing on sea greens and inland seafood species.

“We need to turn our attention to the ocean as a resource – one that gives us delicious, healthy sea vegetables and sea greens,” Bell said.

“We have to improve the wild fisheries that are challenged, but we also have to stop demonizing aquaculture. Fifty percent of the seafood we consumed last year globally was farmed,” Bell said. “I’m a firm supporter of sustainable aquaculture, as an opportunity to take some pressure of our wild fisheries - and as a way to have more humans eating fish.”

And there may be more cookbooks from Bell after the first few.

“I don’t see me running out of things to be passionate about over the next few decades,” he said. “Even in my chef community, this is a very exciting time where the tide is shifting. We have more engaged people, and more people around the world are paying more attention to where their ingredients come from.”

In addition to his work at Ocean Wise and Chefs for Oceans, Bell is an ambassador for Seachoice, an ambassador for the Marine Stewardship Council, and a Blue Ribbon Task Force member for Monterey Bay Aquarium’s Seafood Watch program.

Bell said being newly minted Seafood Champion will allow him to continue his groundbreaking work in raising awareness of seafood sustainability both in Western Canada and worldwide.

“Being nominated and winning the Champion Award for Seafood Advocacy is one of the greatest accomplishments of my culinary career. As a Seafood Champion, I will continue to work in my passion with food, for change in communities in my own back yard and around the world,” Bell said. “This extraordinary award will allow me to dive deeper in my work as an educator, mentor and as leader amongst my peers who strive for change and healthy lakes oceans and rivers globally.”