Luke’s Lobster returns to its roots

Luke’s Lobster and its partners among the Tenants Harbor Fishermen Co-op opened the doors to the company’s only Maine-based restaurant for its second season on Saturday, 20 May, getting back to the roots – and the unique culture – at the heart of the predominantly city-centered seafood business.

Luke Holden, the founder and CEO of Luke’s Lobster, joined Maine Governor Paul LePage and several fishermen involved in the one-year-old cooperative in Tenants Harbor on 19 May to discuss the importance of local collaboration and the downhome message driving Luke’s latest success.

“This is a relatively new organization, founded just over a year ago,” said Holden of the co-op and the restaurant, called Luke’s at Tenants Harbor. “It’s definitely a passion project, in the effort to build a better business for fishermen, a processing company and a restaurant group.”

Built upon a “business plan that just made more sense,” according to Holden, Luke’s at Tenants Harbor has a lot of stories to tell, including the tale of Maine’s first-ever vertically integrated fishermen's cooperative, which has membership of around 20 lobstermen, a seafood processing company/facility (operated by Luke's Lobster out of Saco, Maine) and a restaurant group working in tandem to contribute to local and state industry.

“To see a restaurant, the fishermen and community [come together], it’s great,” Gov. LePage said. “It’s what Maine’s all about. It’s the essence of Maine, this working waterfront.”

With over 19 locations, including restaurants in New York City, Las Vegas, Miami, and Tokyo, Japan, Luke’s Lobster has helped the story of Maine lobster – and the people who catch it – travel far and wide since its start back in 2009 in New York City’s East Village. But it was only in 2016 that the company – founded by Cape Elizabeth, Maine native Holden – was able to return to the Pine Tree State, marking perhaps its most sentimental move yet, according to Luke’s Lobster President Ben Conniff. 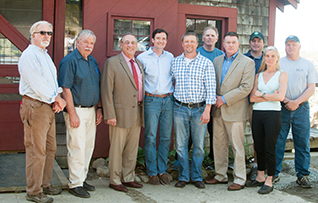 “Being able to grow and spread that word to other cities was fantastic, but to be able to come back for the first time last year and actually open a shack back home in Maine on the dock and be working with the lobstermen, who are streaming in and out while we’re operating the shack right there – that’s been one of the most incredible experiences we’ve had since starting the company,” Conniff told SeafoodSource.

The seasonal Maine-based restaurant is located in Knox County’s Tenants Harbor, at the base of Millers Wharf, which has been family-run for four generations and counting. Currently operated by four brothers – Dan, Hale, Peter and Tad Miller, who are all commercial fishermen – the wharf received lifetime conservation protections under Maine’s Working Waterfront Access Protection Program (part of the Land for Maine’s Future Program) in April 2016, explained Merritt Carey, a former lawyer who helped craft the Tenants Harbor Fishermen Co-op and worked on Millers Wharf in the summers as a girl.

In the beginning, the main aim for the Tenants Harbor Fishermen’s Co-op was to find a buyer for local fishermen’s catch, and to “keep the wharf potentially with the brothers or locally owned,” said Carey, who resides in Yarmouth, Maine. “We needed to get more fishermen to the wharf to increase the volume, so that’s what we spent a lot of time doing a year ago in the winter – bringing these guys together and coming up with some ideas of how we could bring more money back to the fishermen,” Carey said. 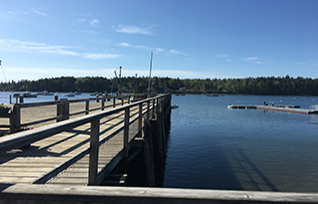 Carey remembers approaching Holden during the initial phases of the co-op’s formation, hoping to find a buyer for the local lobsters, at the very least. She had not told Holden about the cozy, shuttered restaurant space located at the base of the wharf. However, during a cursory Google Maps search of the area, Holden spotted picnic tables. The discovery added another dimension to the quick-forming, innovative idea.

“He was interested in the whole package,” Carey said – lobstermen, wharf, restaurant and all.

Everything leading up to the shack’s premiere 2016 season – from Millers Wharf’s working waterfront protections, announced at the beginning of April 2016, to the official formation of the co-op mere weeks later on 16 April, then the grand opening of Luke’s at Tenants Harbor in May – occurred in rapid succession, recalled Carey.

“It was very condensed. We learned a lot on the fly in the first year, and we’re still learning,” Carey said. “These guys [Luke’s] have definitely learned a lot here, because this is not like any other location they have – it’s not urban, there aren’t as many people around."

While the various Luke’s locations are feeding very different markets in some of the world’s biggest cities, the message is decidedly the same, from Tokyo to Tenants Harbor, explained Conniff. 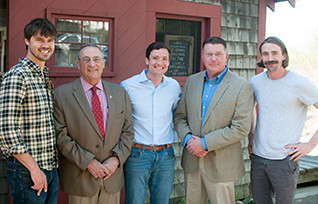 “We’re making that connection between the lobsterman who’s out there putting their blood, sweat, tears and gas into their work, and the consumer, who may be half a world away and isn’t used to understanding where that [lobster] came from,” said Conniff, noting that, “Having roots to Tenants Harbor helps us tell that story.”

The company has long prided itself as an ambassador of Maine’s storied lobster industry, bringing the fondly regarded crustacean to people “from away,” who are hungry for a delicious lobster roll and a great East Coast anecdote.

“When we opened our first shack in New York City, our whole goal was to be an ambassador of this industry and this culture to a city that we found to be wonderful in its way, but lacking that Maine culture that we were used to and the incredible Maine lobster that we were used to,” Conniff said.

Even when branding its products for international markets, Luke’s Lobster has remained steadfast to its Maine roots and story. While working with its operating partners in Tokyo as it established its first international presence there, the company requested that initial branding materials highlighting "New York City lobster" be taken down and amended.

“’But people don’t know Maine,’” the company’s Tokyo partners cautioned, according to Conniff.

“’Well, they need to,’” the Luke’s Lobster team replied.

“Basically, Maine lobster wasn’t something you could get in Tokyo before we got there,” Conniff said. “Also, that knowledge of Maine maybe didn’t exist then, but there’s an opportunity there to tell a story that people can really latch onto, and I think that Maine branding has really helped [this story] take off.”

Luke’s at Tenants Harbor will be open from late May until the beginning of October, serving up a hyper-local menu of dishes that pay “homage to the classic Mainer fare served at lobster shacks up and down the coast,” said the company. Among the menu’s items will be Luke’s Lobster’s seafood rolls, as well as fried whole belly clams, beer-battered fried haddock and blueberry pie made with Maine-sourced blueberries. On tap are a variety of Maine craft beers, including Shipyard’s “Lobsterman’s Choice Ale,” as well as wines and sodas. Consumers thirsty for spirits can order a Bloody Larry – Luke’s Lobster’s take on a Bloody Mary, complete with a split, chilled half lobster tail.

For the first time, the restaurant will be full-service, inviting visitors to “sit back, relax and enjoy the remarkably fresh seafood and stunning harbor view,” Luke’s announced. Such an opportunity is truly a treat for Maine residents and visitors, said Gov. LePage. 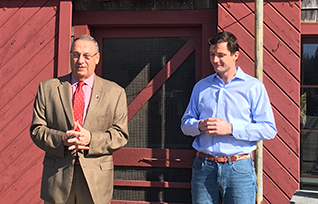 “To have the restaurant here – it’s just so precious. It’s so Maine-ish,” LePage said.

Seafood businesses and organizations such as Luke’s Lobster and the Tenants Harbor Fishermen Co-op represent the best Maine has to offer, LePage said.

Closing his comments, the governor said he would fight to ensure the hard work being done by fishermen and others in the lobster business wouldn't be hindered by harmful trade regulations or tariffs. LePage specifically criticized the eight to 20 percent tariffs currently imposed on Maine lobster exports to the European Union.

“The fishing industry is a very difficult industry to be in. It requires a lot of hard work, and it’s facing very unique challenges all over the world. Right now, we’re fighting with the E.U., trying to get the tariff situation resolved so we can have a bigger market,” LePage told attendees gathered on Millers Wharf on 19 May, as lobstermen banded the claws of their latest catch in front of the shack, the dawning of a new restaurant season just a day away.

Drops in lobster price another pressure on strained industry, symptom of wider trends