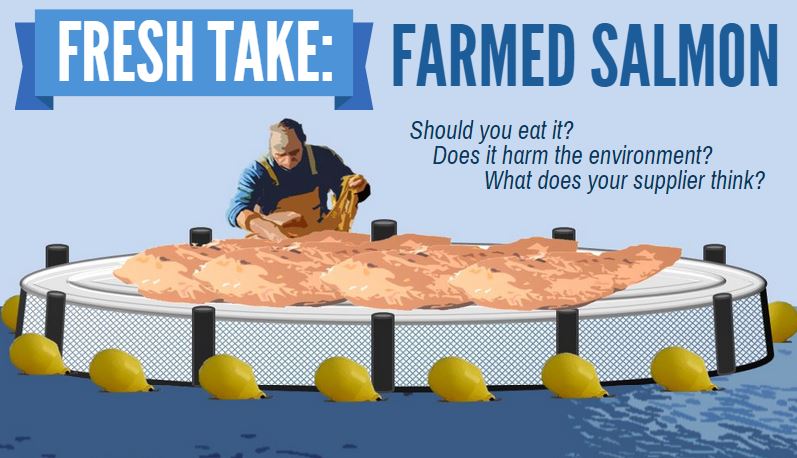 Should you eat it? Is it environmentally safe? What does your supplier have to say about it? SeafoodSource.com investigates farmed salmon.

In late 2014, the CBS television news magazine "60 Minutes" produced a short segment on farmed salmon, giving the consumer public an overview of the popularity of the product, and discussing the arguments about whether the public should or should not buy it. In that spirit, SeafoodSource is presenting this short series of articles as a similar primer geared toward any seafood buyer looking to extend its offerings to include farmed salmon.

It’s one of the world’s most popular . In the United States alone, salmon has been the third most-popular seafood behind shrimp and canned tuna for at least the past 10 years. Worldwide, it’s been the cornerstone of aquaculture operations in a number of nations including Norway, and Canada. By 1996, the amount of farmed salmon sold worldwide exceeded that of wild salmon, and the industry hasn’t looked back since. It’s also been a lightning rod for critics who argue that farmed salmon is harmful to the environment, and may even pose risks to human health. The industry, predictably, rallies to its own defense, labeling such claims as nonsense. Despite the controversies, farmed salmon continues to sell in greater volumes than wild, and with predictions by the United Nations Food and Agriculture Organization that the world’s food needs will only increase in the years to come, the prevailing opinion is that farmed salmon – and farmed seafood in general – is here to stay.

For investors or buyers wondering whether to source farmed salmon, it can be a tough market to navigate, with strong opinions and vested interests everywhere. In this guide, we’ll examine the industry, providing a snapshot of the most commonly discussed problems and the solutions farmers are devising. We’ll cover the biggest human health concerns and the leading environmental issues, featuring testimony from experts and links to scientific papers and reports for further reading. We’ll also offer a checklist of questions buyers should be asking, so they can make more informed choices when deciding where their customers’ salmon will come from.

Click on the banners below to get started. The antibiotics story is available to all viewers. The other three pieces require a paid or trial Premium Membership:

IFFO’s Johannessen: Use of marine ingredients in aquafeed “will not decline in the foreseeable future”