Produced since 1999, the Top 25 North American Seafood Suppliers list (originally published in SeaFood Business magazine) is, perennially, our most-read story. Last year’s list continues to generate significant views – and now, we are happy to add to the legacy with this updated version of the list, which takes into account sales figures from 2015. 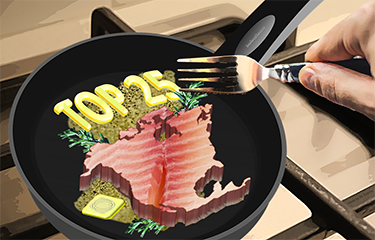 This year’s Top 25 North American Seafood Suppliers list is not a comprehensive list of North America’s top companies. Participation is purely voluntary, except for the relatively few seafood companies that are traded publicly, in which case we review annual shareholder reports and contact the company for more information if they are large enough to be in consideration for inclusion on the list.

However, the majority seafood firms are privately owned and therefore under no obligation to report their revenue. Hence the absence from the list of known behemoths Red Chamber Co., Trident Seafoods Corp., Pacific Seafood Group and Ocean Beauty Seafood, among others. In addition, according to our long-standing policy, for any previously ranked company that does not report their sales in any given year, we carry their sales figure over to the next year, but for one year only. Companies that declined to provide sales data for the second year in a row, and subsequently were dropped from the list, include American Seafoods Group (ranked 10th in 2014), H&N Group (ranked 13th in 2014), Aqua Star (ranked 14th in 2014) and Slade Gorton & Co. (ranked 21 in 2014).

Direct inquiries were made by both phone and email to more than 50 companies, and an emailed request for information was sent to more than 1,600 industry professionals, ensuring we have as complete a collection of data as possible.

Ultimately, while not exhaustive, we believe our list is still insightful and fascinating. Containing suppliers, wholesalers and distributors – companies with vastly different business models – the list the diversity and vibrancy of the seafood industry in North America.

For the first time this year, we have also compiled a detailed dossier of each firm that made it into the Top 25, detailing production volumes, species sold, sourcing information and any new initiatives each company might have launched over the past 18 months, such as new products, entry into new markets and any new sustainability protocols or policies. The report also provides a breakdown of recent company news that may have affected the company’s performance and for the current year. Needless to say, we think it will prove a great resource for anyone involved in the seafood industry. An e-book resource dedicated to this year’s installment of the Top 25 North American Seafood Suppliers will be available for purchase in the near future. Check back with SeafoodSource to grab your copy.

Click through the gallery to view brief descriptions of the companies ranked on this year’s Top 25 North American Seafood Suppliers list. Thanks to all the companies that elected to participate this year. For questions about the rankings or to be considered for inclusion next year, contact us at [email protected].