Arguments over WWF marine stock report drown out the facts

The World Wildlife Fund (WWF) recently released its Living Blue Planet report, essentially studying the status of marine habitats, past and present, and the impacts human behavior such as fishing may have had on them.

The report, which contained data provided by the Zoological Society of London, started an exchange between WWF representatives and the industry that, well-intentioned though it may be, distracts from rather than informs examination of what is essentially an interesting series of data worth studying.

Along with the report’s release, Louise Heaps, chief advisor on marine policy at WWF UK gave an interview to the British newspaper The Guardian that suggested the worldwide situation was dire. The most notable – and most repeated – quote from the interview came when she told the newspaper, “This is catastrophic. We are destroying vital food sources, and the ecology of our oceans.”

Not surprisingly, the report and interview drew harsh criticism from the industry, specifically Europêche, which blasted WWF for trying “to distort” its own data to paint a picture of impending catastrophe. The EU fisheries’ organization even quoted Australian Parliamentary Secretary to the Minister for Agriculture Richard Colbeck, who called the WWF’s promotion of the report “one of a string of misleading campaigns aimed at scaring people into making donations, rather than educating the public.”

When asked about Colbeck’s comments, John Tanzer, marine director for WWF-International, described the report as a “health check” on marine life, saying, “The real danger is in underestimating the threats, and the damage to the state of our ocean.”

It’s not surprising to see another accusation of WWF blowing its own information out of proportion. It calls to mind another WWF report, released almost a year ago, about illegal Russian crab fishing. That report, also a thoughtful examination worth reading, was presented to the media by WWF spokesmen as an indication of a problem that they described in press releases as “rampant” in the Russian fishery. The report, oddly enough, didn’t reflect this. The word “rampant” never appeared anywhere in it – to the contrary, WWF’s own data showed the problem, after peaking in 2007, has declined steadily every year since.

A search of the latest Living Blue Planet report finds the word “catastrophic” only appearing twice, and both times as references to the “potentially catastrophic” effects of growing ocean acidification, a concern shared by a number of NGOs and fisheries management officials from multiple countries.

Also, Europêche makes another noteworthy criticism: WWF’s own data, particularly a graph showing the decline worldwide of marine species populations, while accurately indicative of a decline of 49 percent from 1970 to 2012, also clearly shows the sharpest decline ended in 1988. As Europêche rightfully points out, for nearly the next 30 years, stocks have remained comparatively stable. 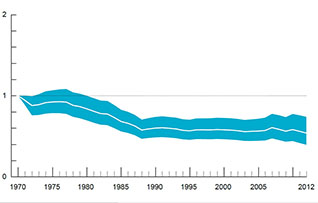 So one could argue that Heaps’ “catastrophic” reference was a little over the top, once again an attempt by WWF to exaggerate its own statistics, but even if we dismiss her comments as inflammatory, that doesn’t make the report by definition inaccurate or worthless. The 2014 crab report, while not living up to the hype, clearly showed the problem of illegal Russian crab fishing did – and still does – exist. The message, a good one, was that this is an issue worthy of continued management and vigilance.

Likewise, in the current report, even the graph that shows a stabilizing decline does still show that the problem hasn’t gotten much better since 1988, and might have even gotten worse, if only slightly.

It’s not perfect – the report could have done without its entire second chapter, which is light on raw numbers and heavy on finger-pointing at the usual suspects, from overfishing to climate change to tourism – but the first chapter does have a lot of data of value. It’s just best to stick to the facts when reading it, without letting the report’s proponents or critics get in the way.

Stand-off mounts in Russia between crab sector and government